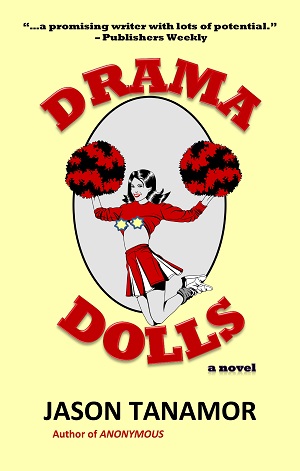 Jeffrey is turning forty. He has a good job, a loving wife, and a beautiful house. When the love of his life passes suddenly, his seemingly normal world turns upside down. The sudden death, along with his midlife crisis, causes Jeffrey to grieve the five stages in unnatural ways. He trades in his Toyota Corolla for a Corvette, smokes pot with the neighbor kid, and dresses up in cheerleader outfits with his pals William and Lena in order to feel young and beautiful.

William and Lena agree to do whatever it takes to help Jeffrey during his grief, even when it means committing minor crimes such as burglary. All is kosher until William notices a downward change in Jeffrey. Distraught by memories of his wife, and despite William's and Lena's best efforts, Jeffrey begins to slowly derail into a dark place that only he could get out of. An internal battle with his emotions and himself, Jeffrey takes matters into his own hands to pull through.

DRAMA DOLLS is an intimate dark comedy about loss and obsession, survival and grief, and the desiring need to take control of your own life.

"So here's an interesting question for contemplation: Is there such a thing as a "standard" bizarro novel, and is it even possible to have such a definition? After all, part of what marks this underground literary genre is that it consists of books that are the most out-there out of all of them, strange and cartoonish stories whose plots change radically from one title to the next. But that said, after now reading hundreds of such books as part of running this website, I must admit that Jason Tanamor's Drama Dolls comes uncomfortably close to containing that fabled "checklist" that such an uncheckable genre like bizarro by all rights shouldn't have, but yet is seeming to slowly come together these days anyway, as more and more bizarro authors start existing in our 21st-century society. Subversive main characters who live on the edges of polite society? Check! Their subversion having to also do with the LGBT community? Check! These main characters acting out through cartoonishly violent, Tarantino-style criminal acts? Check! The entire thing written in a deadpan style reminiscent of a fable or children's tale? Check and mate!" (Out of 10: 7.8, or 8.8 for fans of bizarro literature"
- Chicago Center for Literature and Photography
"This book really engaged me, which is difficult to do because when I get sad I don't go there... This probably means Tanamor could hold mine and most people's attention by telling us anything at all."
- Leo X. Robertson, Author of "Saxual Healing."
"The author does a fantastic job with the main character Jeffery, who definitely has the most intense story in this book as the story starts off after he recently lost his wife. I was transfixed with every bit of Jeffery's story as it slowly unfolded through the book, and how his psyche was dealing with it. As small pieces of information are smoothly brought into the light of the story, another twist or turn will leave you absolutely clamoring for more. The ending was brilliant as it brings everything together but also will leave you shocked"
- AudioBook Reviewer
"...Tanamor puts a signature spin on a high-octane thriller and makes it both funny AND intense...Drama Dolls is interesting and important for a few reasons. the major one being the question it poses being what do we do when we lose the one we love? And how do we bounce back from it?"
- Reading Other People